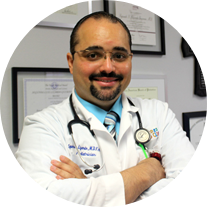 Dr. Segundo Lizardo was born in the Dominican Republic, a beautiful island located in the Caribbean, in La Vega, a town which is recognized internationally for the organization of the best carnival in the Caribbean.

Dr. Lizardo was raised by his grandmother, Juana Santos in San Francisco de Marcoris, Where she taught him perseverance,hard work and to follow his dreams without causing any harm to others. She then became the most influential person in his life. During his childhood and teenage years he was involved in sports,like baseball, basket ball and most importantly swimming.

After graduating from medical school Dr. Lizardo joined his medical school faculty as assistant professor until 2003 when he started his medical residency at Elmhurst Hospital Center, affiliated with Mount Sinai school of medicine Center in New York, graduating in June 2006. Dr. Lizardo is a diplomate of the American Board of Pediatrics, and recently was elected fellow of the American Academy of Pediatrics in recognition for promoting the health of newborns, children and adolescents.

Since August of 2006, Dr. Lizardo and his family moved to Rio Grande Valley and established a pediatric medical clinic in the heart of Mercedes, Texas, where he is actively involved in his community and is a member of numerous prestigious professional organizations. As part of his commitment to pursue excellence in pediatric health care, Dr. Lizardo is seeking Board certification in hospice and palliative medicine. He currently has active privileges at Knapp Medical Center and Doctors Hospital at Renaissance.

Dr. Lizardo married the love of his life Yabrina Rodríguez, MD., with whom he has formed a beautiful family, with their two sons, Luis José and Luis Alejandro. The Lizardo-Rodriguez family has made the Rio Grande Valley their home, and love to spend time together with family and friends.

We are excited to announce that we are now part of a new organization called Kaizen Clinical Partners.

RGV Adult & Internal Medicine Specialists, PA has joined forces with Donna Medical Clinic, PA and Pedro J. Peñalo, MD, PA in order to serve our community in the Rio Grande Valley through a stronger work force, better resources for our patients, and shared values. Together, we will create a sustainable healthy society by improving well-being in our communities. We will become better every year at delivering equitable, excellent, and efficient primary and preventive care to all we serve.